A Way to Spend Your Stimulus

A dear brother in the Lord Jesus Christ asked for suggestions as to how he could spend his stimulus. Here are a few suggestions as to how you can use your stimulus to advance the preaching of the gospel and support those who do. Just click the highlighted/underlined text to go to the page.

Bobby McCreery of To The End of The Earth Ministries is a father of 4 and a devoted husband. He faithfully preaches Christ in Georgia.

Jaycen Saab is a dearly beloved brother, husband, and father who preaches the gospel with Appalachia Cry.

Ryan Denton of Christ in the Wild—a husband and father—is a faithful minister of the gospel. 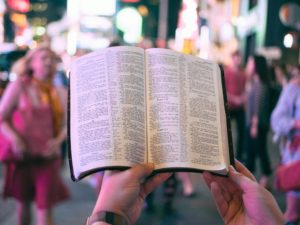 Corey Bailey is moving to Scotland with his wife and 20Schemes!

You can support the Bible Thumping Wingnut Network which graciously hosts my Be A Berean podcast.

You can support my ministry of blogging and preaching with a donation or you can purchase something from my wishlist.

I hope you’ll consider donating to some or all of these ministries.

Philippians 4:17 ESV  Not that I seek the gift, but I seek the fruit that increases to your credit.

Here are the upcoming events where I hope to be.

If you are interested in joining our group, read this and then email me at mac (at) michaelcoughlin.net.

A response to this thread from a kind man on Twitter who was willing to have a discussion.

But to the substance of your tweet – she offered a factual reason why Beth is not a threat – aka that neither her nor anyone had asked to change rules or push boundaries and in fact Beth has repeatedly said she doesn’t want to be a pastor which is in accordance with the BFM.

I don’t think there can be any doubt by anyone who has followed the Denhollanders for any amount of time that one of the primary things they tweet about, talk about, and fight for is justice for abusers and compassion for the abused. To be excited means to have one’s passions or emotions stirred. I can’t think of a better word definitionally to describe their apparent focus on that topic. In fact, the very thread itself is evidence of it. I understand that it could be taken the wrong way and for that, I apologize. I choose to accept that on Twitter I will not always be able to communicate as precisely as needed. The intention is not to tell her to calm down about it, but rather to point out that her excitement about a topic doesn’t necessitate that others be as excited. << Which is effectively her complaint.

Having said that, I recognize how a well-meaning reader could have misinterpreted me and I am glad you brought it up.

//But to the substance of your tweet – she offered a factual reason why Beth is not a threat – aka that neither her nor anyone had asked to change rules or push boundaries and in fact Beth has repeatedly said she doesn’t want to be a pastor which is in accordance with the BFM.//

We differ here, and I don’t want to explain the details, but my point is that Beth Moore has already disqualified herself because of her associations with known heretics, her profession that she receives words from God through direct revelation, AND I will say she’s already violated the complementarian position which is more than just “women should not be pastors.” So my point is that to imply Beth Moore’s position was “affirming complementarianism” is problematic for me and seems to set up those who oppose BM as “quibbling over the small stuff.”

//Did you respond to her argument with contradictory facts? Seconsly, that these men are not one-off “famous” like Beth is a pretty rough self-own for you – that’s the whole point. They *should* be famous – infamous! That they arent shows where the energy is being directed here.//

Her argument was basically, “lots of people oppose BM but not a lot of people opposed these abusers, but they ought to!” And, in the case of someone who ACTUALLY knew about BOTH those things, I would agree that that person should oppose both. That is why I pointed out in my 4th tweet that if there were actual cowards out there who could have said something about both and chose to only speak on BM, then I am all for naming those folks. Instead, RD’s tweets come across as a broad sweeping accusation against anyone who said anything about BM but not also about these abusers having the wrong priorities.

As far as a self-own, I don’t know why a couple of guys I never heard of not being famous owns me. I’m not disagreeing that these men’s wickedness should not be made public and even infamous. I am pointing out that the fact that their wickedness is not public is reason enough a bloke like I am couldn’t have tweeted about it. I didn’t raise BM to prominence, so I don’t feel responsible for her being famous, nor do I take responsibility for men I don’t know not being famous.

So I won’t disagree with you that it is too bad this happened, but the point is that I don’t think you can say that I cannot tweet about BM until I’ve sufficiently made unknown abusers infamous. Beth’s legacy is public and I can scrutinize facts of it. Random abusers in other cities are part of police investigations and it probably isn’t my role to pass much judgment there without facts. I can judge known facts about BM without venturing into slander. I can’t accuse a man in Arizona of abusing a child without a verdict just because I read a few reports he denies.

//Finally, the problem is very much broad. 700+ victims and counting and those are just the ones known about – these are just some instances of the lack of focus and energy that has allowed there to be so many victims.//

I addressed this a couple of ways. First of all, I am not saying 700+ victims isn’t broad. What I said is that 700+ victims is not “as broad” as the number of victims of BM’s teachings. (Now if you disagree with me here that BM is a dangerous teacher to be avoided, that’s up to you. But don’t miss the point-what we of BM’s influence is far greater than the known cases of abuse.)

Now that doesn’t justify any abuse. But my point is that when the original argument by RD is that we have a problem of scale (because firestorms are bigger for BM than abusers), then we ought to consider the outrage in light of the magnitude of the influence of whom we are outraged by. Similarly, there would be more outrage if Trump did something immoral than a pastor in my city no one heard of. We all have battles to fight, and the bad teaching of BM is something more of us face on a local level than abusive SBC pastors who don’t go to our local church.

There’s probably a kid in my neighborhood being abused today. I can’t reasonably accuse you of not caring enough, now could I?

Secondly, I pointed out in my tweet that 3000 babies a day are murdered through abortion. If we are arguing magnitudes then I could just as easily argue that Rachel’s focus ought to be on that instead of 700 or so cases of abuse over a course of 2-3 decades. But my point was not to diminish the seriousness of abuse, but to point out that we all fight different important battles, none of which are necessarily based on importance or magnitude. They are usually based on “how we’ve been victimized” or “to whom we feel compassion.”

So I completely understand why a woman like RD would dedicate every waking moment to focus on abuse while babies are having their arms torn off in abortion clinics within driving range. I’m 100% OK with that being her thing she focuses on in her Christian life.

And I’m OK if she exhorts people to “do more.” I think we ought to, myself included.

I realize abuse gets you excited and so you are adamant in fighting it. Commendable.

But affirming Beth Moore as complementarian anything is as mistaken as saying child abusers who don’t kill their victims affirm the sanctity of life. At some point you’re entirely disqualified…