The Lost Medallion: The Adventures of Billy Stone: I promise, NO SPOILERS.

I will proceed with the same three measuring sticks I have used in the past to try to judge the merit of this movie. Ultimately, the question is, should you spend the resources God has provided you with to see this flick? Or would your money be better spent elsewhere…there is certainly need all around us.
I offer the three criteria I will use to discern the worth of Home Run in order of importance.

I will consider them in reverse order:

Is there a practical application to the lessons learned within?

The Lost Medallion is the story of a Billy Stone, played by Billy Unger, and his friend Allie, played by Sammi Hanratty as they go on an adventure through time to find the secret concerning a lost medallion. Billy and Allie are desperately trying to save “the future.” The story is fun in an Indiana Jones for kids sort of way.

James Hong enters the story as a sage old man who helps lead the children on their adventure to save their land from Cobra, played by Mark Dacascos. The added element of some better knows actors made the movie fun to watch. Cobra is the epitome of evil in the story, killing mercilessly. Ultimately, the fact that he lacks a truly pure heart is his downfall, a good lesson for us all. 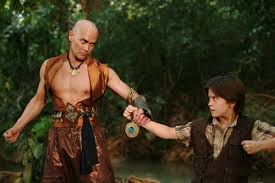 Billy has to really dig deep to continue to battle even when the odds are against him in order to find meaning. And the team that he leads needs to learn to each use their individual skills to overcome the enemy. I won’t spoil the ending…

Will the movie tempt someone to sin?

Now we all have different sin-tendencies, I know, but I can only speak of a few of the more obvious ones. I saw no areas of the movie where a person would have a problem with sin. This is truly a well done movie safe for kids and families to enjoy!

Unfortunately, the movie does fail in this area. The appearance of Alex Kendrick was supposed to solidify a good gospel message, right? Wrong.

Sadly, I don’t even recall Jesus’s name being mentioned, let alone a clear gospel. There was a single veiled reference by James Hong toward the middle of the movie where he spoke of a King who had died for him. Admittedly, I knew to Whom he was referring and began crying over love for my Savior at that time, but to someone who didn’t already know Christ – it was nothing more than a veiled reference to something they won’t understand.

Now, every movie doesn’t have to have the gospel, but, if a movie bills itself as Christian, which is how this was shared with me, I have to say it ought to at least have more attempts than The Lost Medallion had at sharing the gospel.

In conclusion, you are safe to spend a few dollars for the entertainment value of The Lost Medallion. It is the kind of movie I would watch over and over with my children. I think the lessons in the movie can be good springboards to spiritual discussion, but safe for all ages.

I watched this movie free from the production company. I was not required to write a positive review. The opinions I have expressed are my own. I am disclosing this in accordance with the Federal Trade Commission’s 16 CFR, Part 255: “Guides Concerning the Use of Endorsements and Testimonials in Advertising.”